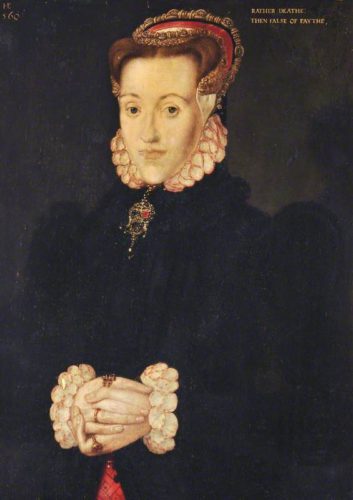 Debapriya Basu is Assistant Professor in English in the Department of Humanities and Social Sciences, Indian Institute of Technology, Guwahati, India. Her doctoral research (jointly funded by a Government of India University Grants Commission Research Fellowship and an Inlaks Research Travel Grant to King’s College London) was on Renaissance English women poets. She was Research Fellow at the School of Cultural Texts and Records (SCTR), Jadavpur University, Kolkata, India and has taught in the SCTR’s Postgraduate Diploma Course in Digital Humanities and Cultural Informatics. She was Project Supervisor in the Bichitra Tagore Online Variorum project (www.bichitra.jdvu.ac.in) and is a contributor in Sukanta Chaudhuri ed. ‘Bichitra: The Making of an Online Tagore Variorum’ (Springer, 2015). Her online edition of Anne Askew (work-in-progress) was initially funded by an Erasmus Mundus Postdoctoral Fellowship (2014-15) and is hosted by the University of Amsterdam.

The sixteenth-century gospeller and female preacher Anne Askew lived a dangerous life in dangerous times and was made to pay the ultimate price for her headstrong will. She was a contemporary of Anne Boleyn, who died a short decade before her. But unlike the most unfortunate of Henry VIII’s queens, Askew’s death has largely been forgotten by the modern world. She was a remarkable woman, passionate about her faith and rashly courageous in proclaiming it in a world fraught with religious dissent and state-sanctioned violence. Her quiet radical Protestantism so disturbed patriarchal authority that she had to be turned into an example and a spectacle: she was repeatedly imprisoned, illegally tortured in the Tower of London because she would not betray her reformist sisters, and burnt at the stake for heresy in 1546.

Her life, although sparsely documented, is fascinating. But her life beyond death is even more compelling. While in prison, she was persuaded by her co-religionists to write an account of her interrogations. After her death, her life and her words were appropriated by two firebrand reformers: the martyrologist John Foxe (he of the Book of Martyrs of 1563 fame) and John Bale (known to modern readers primarily as the writer of the earliest extant verse play in English, Kynge Johan, c. 1538). Barely were her ashes cold when the first-person account of Askew’s trials was published with copious glosses and fire-and-brimstone editorial rhetoric by Bale in two books titled The First Examination of Anne Askew (1546) and The Latter Examination of Anne Askew (1547).  These unique first-person accounts of a female martyr sold so well that several editions were printed throughout the century. Almost two decades later, Foxe printed Askew’s words without Bale’s commentary. But he too added interpolations and concluding remarks describing the site of her burning at Smithfield and intensified the emotion with a powerful woodcut illustration.  In one of the frequent ironies of history, these masculine textual manipulations of the dangerously willful twenty-five year old Anne turned her into the last word in persecuted Protestant victimhood.

Anne Askew was born in Lincolnshire in 1521 to Sir William Askew and Elizabeth Wrottesley.  Sir William was knighted in 1513 and became high sheriff of Lincolnshire around the time of Anne’s birth. Her brother Edward was Henry VII’s cup-bearer, her half-brother Christopher gentleman of the privy chamber, and her sister Anne married a lawyer in the employ of the Duke of Suffolk.  If not demonstrably reformist, her family background was therefore solid privileged gentry with close connections to the court. It is generally accepted that she received a good education, possibly from tutors. She married Thomas Kyme, only to seek divorce, startlingly, on grounds of scriptural incompatibility. Responding to the mention of ‘mastre kyme’ in Askew’s account of her examination before the king’s council at Greenwich in The Latter Examination, Bale is inspired to provide an account (derived from unnamed sources) of her marriage. According to him, Askew’s father had negotiated for a match between his eldest daughter Martha and a rich neighbour’s son, Thomas Kyme. Unfortunately, Martha died before the marriage could take place and Sir William forced Anne to marry Thomas against her will. Bale describes her union with Kyme as ‘ungodly,’ ‘unlawful’ and ‘coacted’ or coerced. Bale notes that she despatched her wifely duties in a Christian manner and had two children. However, ‘In processe of tyme by oft readynge of the sacred Bible’ she converted to Protestantism.

Askew’s love for nonconformist and risky behaviour is witnessed by the corroborative record, independent of Bale, of Askew’s examination it the Privy Council. The proceedings of the Privy Council show that on 19 June 1546 one Thomas Kyme appeared in court with his wife, but she is said to have refused to acknowledge him as her husband. This subversive behaviour is looked at askance by the Council, which lets Kyme go but detains Anne because ‘she was obstinate and heady in reasoning of matters of religion, wherein she showed herself to be of naughty opinion’ (Harley MS. 256. Fol. 224). As though issuing a gentle rebuke and not a rigorous punishment, the recorder sighs, ‘seeing no persuasion of good reason could take place, she was sent to Newgate, to remain there to answer to the law.’ Askew’s headstrong and confrontational personality, which Bale does his best to suppress by shifting the focus onto the alleged wrongs committed by father and husband, is evident from her own words too. By her own account, she often flatly refuses to answer questions put to her by her inquisitors. When she is told that the priests of Lincoln would ‘assault me and put me to great trouble,’ she ‘not being afraid’ made it a point to go there ‘to see what would be said unto me’. For six days she sat reading the Bible in Lincoln minster in what amounted to an act of civil disobedience, openly flouting the legislation of the Act for the Advancement of True Religion (1543).

After having forced all churches to keep a copy of the ‘chained’ Great Bible on the premises, Henry VIII sought to regain lost control through this Act by restricting ‘women, artificers, apprentices, journeymen, serving-men of the rank of yeoman and under, husbandmen and laborers’ from reading it. In an added clause, women of the gentry were allowed to read the Bible only in private, but Askew’s public performance in Lincoln minster was surely sufficient for her to be noted among the lay preachers who disseminated ‘pestiferous and noisome teachings and instructions’ in underground churches and heretical conventicles and against whom this Act was ultimately directed. Indeed, the Queen herself was not immune to charges of heresy, as John Foxe recounts in his Acts and Monuments. In the summer of the same year that Askew was to die, a warrant for Queen Catherine Parr’s arrest for Protestant sympathies was issued by two of Askew’s interrogators Stephen Gardiner, the Bishop of Winchester and Lord Chancellor Wriothesley. Although the crisis was avoided and Catherine became famous in history as the one who survived, this fraught atmosphere at court rendered Anne Askew’s connections to the Duchess of Suffolk and other Protestant women a strong vulnerability in the face of her unconventionally-expressed Protestant beliefs, which possibly led to the previously unheard-of and grossly illegal racking of a woman of gentle birth.

The process of Askew’s condemnation and burning was instigated with an interrogation (leading to twelve days’ imprisonment in the Counter) at Saddler’s Hall by the lord mayor of London and the bishop of London’s chancellor, Edmund Bonner, under the Act of Six Articles (1539). The first article of this Act concerned the Eucharist, which was a deeply controversial issue at the time. The Six Articles Act adopted the Catholic position in the debate, asserting that ‘the natural body and blood of our Saviour Jesus Christ’ is present ‘really’ in the bread and wine consecrated by the words uttered by a priest and that ‘after the consecration there remaineth no substance of bread or wine, nor any other substance, but the substance of Christ, God and man.’ Dissent was heresy and those who did not agree with this view would ‘suffer judgment, execution, pain, and pains of death by way of burning, without any abjuration, clergy, or sanctuary to be therefore permitted.’

Askew strongly defies this injunction in her writing. ‘I believe it to be a most necessary remembrance of his glorious sufferings and death,’ she confidently asserts as she repeatedly invokes the words of the Bible, that other kind of powerful word accessible to the laity thanks to the reformation. Her arguments and rejoinders (which together slant into the dangerous area of women’s preaching) are solidly based upon the Protestant tenet of sola scriptura: if it is not in scripture, it is not under discussion. Her memory is remarkably retentive and, in a cryptic style that is highly dramatic thanks to its brevity, she throws biblical chapter numbers in her interrogators’ teeth without deigning to quote or explicate. Her sense of drama and literary effect is highly evolved. She describes her racking in the fewest words possible: ‘Then they did put me on the rack, because I confessed no ladies nor gentlewomen to be of my opinion, and thereon they kept me a long time. And because I lay still and did not cry, my lord Chancellor and master Rich took pains to rack me their own hands, till I was nigh dead.’

Askew’s pointed silences, however, are defused by Bale’s clamour. Not for nothing was he nicknamed ‘bilious Bale’ by his contemporaries. Where she remains silent in irony or for dramatic effect, he senses a dangerously powerful statement that he feels compelled to override with quotation and, sometimes, bitter and personal abuse. Foxe’s strategy in re-forming Askew is slightly different. After presenting Askew’s account with minimum intervention, he pens a moving eyewitness account of the scene of her execution, milking the tragedy and pathos of the moment for his own partisan purposes. This, along with the woodcut, historicizes Askew completely, and nullifies her dangerous and threatening tendencies through distancing from Foxe’s present.

Her harassment, arraignment, imprisonment, torture and ultimate death notwithstanding, Anne Askew’s words and recorded actions give the lie to her portrayal by both Foxe and Bale as the last word in victimhood. Reading Bale’s commentary now, it is glaringly obvious that his constant and unrelenting interventions subtly mould the impact of Anne’s own voice, and the way in which both he, and later Foxe, portray the dead girl tries to diffuse a lot of the tensions that her very subversive and unconventional life had the potential to generate. Bale upholds her as a mascot of subversion in his own fight against religious hegemony but paradoxically tries to erase those aspects of her personality that pose challenges to the patriarchal order. While the authorities turned Askew into one kind of spectacle, her male co-religionists turned her into another. This is something that men have always done to contain the unruly energies unleashed by dangerous women who could not, for historical, strategic or personal reasons, simply be ignored.

Bale’s rhetoric reveals once more the fact that subversion is not necessarily coterminous with radicalism. Askew was undoubtedly as deeply religious, as thoroughly virtuous and as godly as Bale and Foxe would have her be. But she was also reckless, brilliant, a poet and a writer, and a woman on a mission. As her texts make clear, her death was the result of a series of informed choices. Anne Askew consciously challenged the established order with the only weapon a woman in her time and circumstances could effectively wield. She used her religion to acquire power, which both endangered her and made her dangerous. By re-forming Askew in the image of the helpless victim of state cruelty both Bale and Foxe silently acknowledge her power and disruptive potential as a dangerous woman.

John Lingard, A History of England, from the First Invasion by the Romans (Philadelphia: Eugene Cummisky), Volumes 5-6, vol. 6, p. 267.

John Gough Nichols ed., Narratives of the Days of the Reformation, Chiefly from the Manuscripts of John Foxe the Martyrologist (London: Camden Society, 1859), pp. 39–45, 299–313.