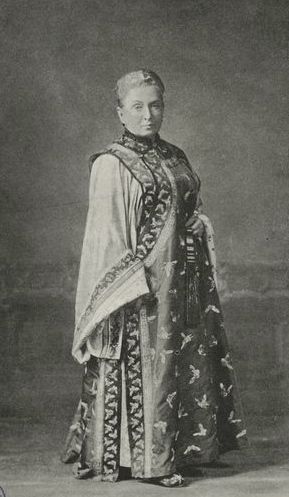 Scottish PEN is the Scottish centre of PEN International, a worldwide organisation committed to promoting literature and protecting freedom of expression. An important strand of PEN’s work is the support of women writers, so often marginalised. Scottish PEN has produced a revised version of its 100 Scottish Women Writers poster. Twelve writers from the poster will be featured as part of the Dangerous Women Project, in a contribution each month by a member of Scottish PEN.

When she was 33 years old Isabella Bird, the Yorkshire-born daughter of an Anglican clergyman, wrote this:

I feel as if my life were spent in the very ignoble occupation of taking care of myself, and that unless some disturbing influences arise I am in great danger of becoming perfectly encrusted with selfishness, and … of living to make life agreeable and its path smooth to myself alone.

The year was 1864. Isabella was living in Castle Terrace, Edinburgh, with her mother and sister, where they had moved after the death of her father. She had been an intermittent invalid since childhood, and felt herself cocooned in a comfortable but stifling respectable existence. But she had some experience of a different life, and it was perhaps that experience that enabled her to understand the danger to herself of ‘becoming perfectly encrusted with selfishness’.

She was one of a generation growing up when the expectations of women were repressively limiting, and when illness, lethargy, insomnia and depression were often the consequence. Isabella experienced all of these, and recognised the potential of women being dangerous to themselves. Years later she wrote: ‘I shall always in the future as in the past have to contest constitutional depression by earnest work and by trying to lose myself in the interest of others.’

Her first experience of liberation came in 1854 when she was sent off to North America to stay with cousins, in the hope that the change of environment would be good for her health. Eighteen years later she was ready for another, much more ambitious expedition. She was now 41, unmarried and uninterested in marriage and the conventional life marriage implied. She set off alone on travels that took her to Australia, Hawaii and America’s Pacific coast.

In San Francisco she boarded a train to head east. California had since 1869 been connected by rail to the east coast, but Isabella was going only as far as Truckee in the Sierra Nevada. She stepped out into the seething turmoil of a makeshift mining town and made her way unconcerned through streets crowded with drunk prospectors, gamblers and prostitutes. She was going to hire a horse and ride alone to Lake Tahoe. She was going to ride astride, in an outfit she had specially adapted for the purpose – though no one in Truckee cared much about this revolutionary step. Tahoe, with its ‘brilliancy of sky and atmosphere’ and ‘elasticity of air’ and an alarming encounter with a bear, didn’t disappoint but it was just a prelude. The real adventure was to come.

Back on the train she continued on to Denver. Her destination this time was Estes Park, in the Front Range of the Rocky Mountains northwest of Denver, the railroad terminus. Estes Park was an unsurveyed wilderness, barely inhabited by humans but teeming with wildlife. She bought a horse and acquired a guide, Jim Nugent or Mountain Jim, a one-eyed former Indian scout, dressed in tattered deerskin and heavily armed – ‘as awful looking a ruffian as one could see,’ she commented cheerfully in a letter to her sister Henrietta at home in Edinburgh. The cheerfulness is indicative. Her response to wildness, natural and human, was full of enthusiasm, although when Mountain Jim made overtures of affection she turned him down, and not all the wild men she encountered were as accommodating. Jim met a violent end, shot by Griffith Evans, a cattleman in whose cabin Isabella stayed while in the valley.

Isabella spent months in the Rockies, and would return to Estes Park, but this time, running out of money, she earned her keep by cooking and cleaning for the cowboys. She relished the labour. ‘I cleaned the parlour and the kitchen, washed up, baked and then made 4 lbs of sweet biscuits and baked them after which I had to clean all my tins and pans and do my own room and haul water.’ Her willingness to work was, in a sense, a passport to safety. The men clearly did not feel threatened by her, and she retained her confidence in the ‘habit of respectful courtesy to women’ which she believed characterised the frontier.

She was often alone when she travelled in the Rockies, was sometimes lost and acutely aware of isolation and vulnerability. On one occasion she was engulfed in a snowstorm which obliterated the track.

I cannot describe my feelings on this ride, produced by utter loneliness, the silence and dumbness of all things, the snow falling quietly without wind, the obliterated mountains, the darkness, the intense cold, and the unusual and appalling aspect of nature. All life was in a shroud, all work and travel suspended.

But throughout her writing it is implied that potential danger was vital to her avoidance of being a danger to herself. Of another occasion, when she lost her way, she wrote: ‘I felt very eerie and made up my mind to trudge on all night steering by the pole star…it was gruesome’. Baking bread for cowboys, a gruesome trudge through the night – a far cry from the drawing rooms of Edinburgh, but both, in their different ways, a means of saving herself.

Isabella returned to Scotland, but did not settle into a passive middle-class existence. She campaigned on behalf of slum dwellers and Hebridean crofters – she spent a lot of time in Mull. She worked on creating a book out of her letters to Henrietta, which became A Lady’s Life in the Rocky Mountains (1879). But the familiar symptoms of neuralgia and depression returned, and again the remedy lay in travel. This time she sailed for Japan, a country in transition since in the 1850s it had opened its ports to foreign trade. Isabella was impatient to escape from the cities that were responding so rapidly to Western influences. Her subsequent account of her experiences, Unbeaten Tracks in Japan (1880), was frank in its description of the primitive squalor – dirt, disease, wretched food, rats, mosquitoes – she encountered in remoter areas. Her publisher, John Murray, tried to persuade her to tone down some of her descriptions. Unsuitable topics for a lady to write about, or for ladies to read about? Her books – and she wrote about all her journeys – were popular.

At the age of 50 she married Dr John Bishop, who cared for her sister in her last illness, but had only a brief five years before he died. After his death she was on her travels again and on the move for most of the rest of her life, in Tibet, Persia, Kurdistan, Korea and China. In none of these countries was she able to travel alone as she had done in the American West. She needed at the very least an interpreter. In Persia she joined a larger expedition in the charge of Major Herbert Sawyer, who was carrying out a reconnaissance of territory where Britain, wary of Russian interests, was keen to have a presence. It was dangerous country. Isabella felt that travelling under escort entailed ‘a certain abridgement of my liberty’ and would have preferred to travel alone, but accepted the necessity of protection.

On the journey from Baghdad to Tehran they encountered blizzards as they crossed the mountains east of Kermanshah. The ‘steady, blighting, searching, merciless blast…swept mountain-sides bare; enveloped us at times in glittering swirls of powdery snow which after biting and stinging careered over the slopes in twisted columns; screeched down gorges and whistled like the demon it was’. She was on mule-back, wrapped in several woollen layers, three pairs of gloves, sheepskin, a fur cloak and a mackintosh, but these ‘were as nothing before that awful blast’. They passed the frozen corpses of some who did not make it. It was the worst of all her journeys, and of course to her fellow countrymen there was always the possibility that she was considered a burden, an impediment to the purpose of the expedition. ‘Miss Bird’s recklessness is a constant source of anxiety to the English officials who are naturally desirous that, as a British subject, no harm should befall her,’ commented one.

In 1892 Isabella Bird was among the first group of women to be elected fellows of the Royal Geographic Society, a move resisted by many of the Society’s members. Lord Curzon, not yet Viceroy of India, made his views clear in a letter to The Times, 30 May 1893.

We contest in to the general capability of women to contribute to scientific geographical knowledge. Their sex and training render them equally unfitted for exploration, and the general professional female globe-trotters with which America has lately familiarised us is one of the horrors of the latter end of the 19th century.

A horror, a threat to established institutions, to the fabric of society. The idea of a vicar’s daughter roughing it in the wilderness in the company of a one-eyed ruffian, or riding a yak and nearly drowning while crossing a river in Ladakh, or in her sixties making her way up the Yangtze River with only some basic rations and her photographic equipment (she had taken lessons in photography), jeopardised fundamental assumptions about the role of women. If they could do these things, how did such activities reflect on the aspirations and expectations of men? And Isabella Bird, small in stature and quietly conventional in appearance, not only did these things but wrote about them. She publicised her challenge to prevailing expectations.

The consequence of the controversy was that although the initial fifteen women members were not expelled, it was agreed that no more would be elected. Isabella herself did not join the debate. ‘The fellowship as it stands at present is not worth making any trouble about,’ she wrote. ‘At the same time, the proposed act is a dastardly injustice to women.’ In other words, it was a gesture mired in prejudice and compromised by fear. The fellowship made no difference to her life. Soon she would be back in the Far East.

‘It is pleasant,’ Isabella wrote to her sister, ‘to be among people whose faces are not soured by the east wind, or wrinkled by the worrying effort to “keep up appearances”; who have no formal visiting, but real sociability; who regard the light manual labour of domestic life as a pleasure, not a thing to be ashamed of.’ Travel was a kind of safe haven, the return from travel a re-entry into a world of limiting and dangerous convention: ‘Every step now seemed not a step homewards but a step out of my healthful life back among wretched dragging feelings and aches and nervousness.’ By choosing to avoid a smooth path through life, Isabella saved herself from a wretchedness that in her view was at least partially self-imposed.

In 1897 she was in Korea. ‘I have freedom,’ she wrote to an Edinburgh friend, ‘and you know how I love that!.. I am so thankful for my capacity for being interested. What would my lonely life be without it?’

In 1904 she died in Edinburgh. She is buried in the Dean Cemetery.