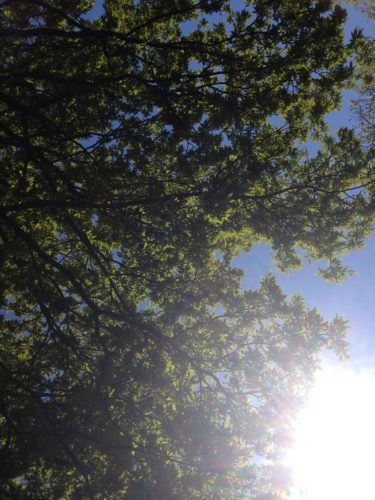 Esa Aldegheri grew up between Italy and Scotland. She has always loved languages and has used them in many different ways for travel and work. She is currently working on an ESRC-funded PhD at the University of Glasgow, investigating which methods of story exchange can best help navigate the encounter between forced migrants and local populations in Scotland and Italy. She also loves trees and bridges.

There was an elder tree in the garden of the house where I grew up. It was easy to climb and its branches formed a shelter filled with filtered sunlight. I loved that tree. One evening I sat hidden among the elder smells when my Scottish mother called on me to get down out of the tree and come in. I moved reluctantly, slowly, so my Italian father called me too. Then something happened in my brain and I felt as if something had exploded inside my head.

Hearing the word “tree” in English and then in Italian had triggered a sudden landslide of realisations. This thing I was in, this high green thing I loved, was a “tree” for my Scottish family at the same time as it was an “albero” for my Italian family. Different words for the same thing; but how could it be the same thing if it was different words? And did that mean there were other languages, other words, other worlds with different ways of saying “tree”? Or anything else? What if I could never understand them all?

I almost fell off my branch with the shock of it, this sudden whoosh of immense possibilities, of unknown multiple words for the same thing. My bilingual child-mind was overwhelmed by an avalanche of thoughts which I now know are fundamental concepts in semantics and philosophy, with names like “semantic equivalence”, “referent” and “meaning”. But then I knew nothing of these things. I was amazed and very afraid because I couldn’t find words for huge questions about words. I was also hungry and went in to the comfort of teatime with my family. The tree kept on filtering sunlight and making elder-smells.

Thankfully my brother persuaded me that I could never know how many different words there were for tree, right now across the whole world, or in past times using languages now forgotten, or in the future. I did what I could and started collecting synonyms in English and Italian. My view of the world was never the same again because my mind had been opened to the possibility of endless difference. It felt like I carried a superpower in my brain. The superpower of infinite difference, I called it.

This meant that I was an annoying child to teach, and probably to play with too. I was distracted by collecting words in my head, and arrogantly reluctant to listen to teachers who seemed to be so sure that there was only one way of doing things. I got into trouble with the nuns at catechism who wanted me to believe that there was only one way of believing: what about all the different places and people with their words for God, church, heaven, hell? Stop asking dangerous sinful questions, I was told. I discovered that my superpower was certainly a danger to me when it got me into repeated, bloody fights with the class bully who wanted to enforce his way of doing things.

Being bilingual gave me an early realisation that there is never just one way of saying, seeing, being. This awareness helped me grow from that annoying child into a dangerous woman. It is my dangerous power; not a superpower, perhaps, but one shared with many super women. One of these, the writer Chimamada Ngozi Adichie, beautifully describes the awareness of plurality which leads to seeing “the danger of the single story”: there is never one single story, one single version of events, and if you think there is you will be in for some unpleasant surprises.

Why is this realisation dangerous? Why I am I a dangerous woman? Because having two languages from birth means I refuse to believe that one is better. Because my family and I are a living example of plural identities, migrant, multilingual, flourishing, in times when many wish us to believe that migrants are dangerous. Because once you realise that there is never one single story it is very difficult to stop asking dangerous questions. Many people and many systems have tried – are still trying – to impose one single version of religion, of economics, of politics. One language that is better, one race that is superior. People who challenge such impositions are dangerous. If you pull down just one brick in the wall surrounding single-story-land, the view changes forever and the wall is in danger of being rebuilt as a bridge.

My view was further changed as my collection of words extended into other languages; close cousins like French and Spanish and then Arabic, unrelated and endlessly beautiful. I travelled and lived in the Middle East, then came home to Europe where I have worked in various initiatives of welcome and bridge-building. One such initiative was a project called “Making it Home“. It involved two groups of women – local women from Pilton, Edinburgh, and women who were asylum seekers and refugees in Maryhill, Glasgow – building understanding and friendships through poetry-based film-making. We learned so much. We cried and laughed and had parties. We ended up commended by the Scottish Parliament. It was all terribly dangerous, of course. We forgot to add a health warning, something like, “Caution: this project might change your mind about folk who are different from you”.

There are other health warnings related to being multilingual and working to build connections across boundaries. There is the danger of living among words for their own sake, rather than for the people who speak them. There are the very real dangers that arise when welcoming plurality becomes unquestioning acceptance of damaging behaviour. I am fortunate in my friends, family and colleagues who help me navigate these dangers and many others. I am also fortunate in knowing many other dangerous women who, by being multilingual, question single-story narrative. My mother, first of all, who taught my brother and I English and many other things that widened our horizons. My colleagues from the “Research Multilingually” project at Glasgow University who work so hard to prove how and why plural identities and languages are beneficial for our society. My friend from another EU country, who works in a B&B making breakfasts for people who sit reading racist newspapers in front of her. She is trilingual and so is her child. I have seen her disarm people’s prejudice with her intelligence, perfect bacon rolls and gentle humour. She is a living danger to the editors of those newspapers and the monolithic worldview they wish to promote.

People who are not multilingual often apologise about being “rubbish at other languages”, but I also know many monolingual women who dangerously challenge single-story narratives. I have seen them shift and widen perspectives, challenging single-story impositions, translate experiences across boundaries of understanding. Does this contradict what I wrote earlier about dangerous multilingual women? I think it expands and reinforces my argument. Different languages are just one path to realising that the world is “incorrigibly plural”, to quote the poet Louis Macneice from his poem “Snow”. There are many other paths.

Here are just some examples of dangerous monolingual women: my friend who works as a childminder and every day translates the world into play for “her” children, showing them difference and celebrating it through fun. My friends who are poets, photographers, artists who labour to distil different views of the world into powerful images that jolt us out of complacency. A lawyer I know who interprets the language of the courts for those she represents, changing it through her kindness from something fearful to something understandable. An old Scottish lady I know whom I saw crossing a busy bus to sit with a tearful Syrian woman, holding her hand and saying, “There, there, dearie”.

Dangerous, all of them, all of us, women who live out the logical consequence of that first intuition that overwhelmed a wee girl in a tree: that if one thing has many different names, there are many names for the same thing, but that thing doesn’t change. The elder tree kept on growing whatever I called it. There are many ways of being human, but the thing that remains constant, the common thing we share, is being human, whatever language(s) we speak. That is the truly dangerous thought, enduringly dangerous, to those who want to discriminate against people and groups of people that are different to the single-story norm.

We live in dangerous times. The philosopher Simone Weil, in her own dangerous times, said that “once a certain class of people has been put by the authorities outside the ranks of those whose life has value, nothing comes more naturally than murder.” So we too have to live dangerously and challenge systems and people who see difference as valueless. We have to cross boundaries of understanding, daily opening up the possibility that things can be different, which means sowing seeds of hope. In whatever languages come best to us, because language doesn’t have to be made of grammar and vocabulary.