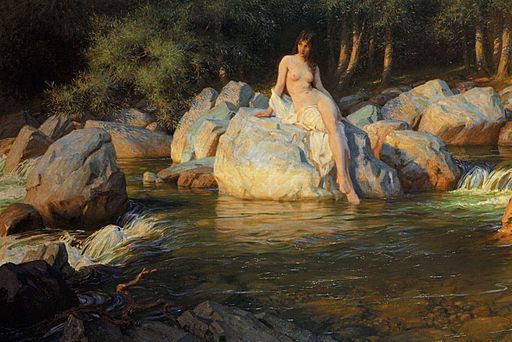 Kirsty Logan is the author of short story collection The Rental Heart and Other Fairytales (Salt, 2014), which was awarded the Polari First Book Prize and the Saboteur Award for Best Short Story Collection, and debut novel The Gracekeepers (Harvill Secker, 2015), which won a Lambda Literary Award. Her most recent book, A Portable Shelter (ASLS, 2015), is a collection of linked short stories inspired by Scottish folktales and was published in a limited edition with custom woodblock illustrations. Kirsty also works as a book reviewer, writing teacher and editor.

And isn’t that sweet? Isn’t it just too perfectly sweet, like it’s a message of hope left for me and Alice, a blessing for our life together?

I caught the ring with the edge of the broom as I was sweeping out the kitchen. It scraped along the tiles and made a hell of a racket. At first I thought it was just rubbish, all clarty with grot and bugs, but when I rinsed it under the tap it came up lovely. A little circlet of glass, green as a summer sea, bright on its surface but with shadows at its centre. I thought maybe Alice’s granny had left it for us on purpose. Maybe she wasn’t so bad after all.

This was her house, before, and it’s not that she didn’t know that we were together, but it’s complicated. She called me Alice’s friend, and I could hear the way she put inverted commas around it, even after Al and I had lived together for years and we’d both visited her a thousand times in this musty old house that always smelled like the sea even though it was miles from water.

I slid the ring on my wedding finger then raced through the house, calling for Alice, and found her in the spare bedroom with her arms full of floral duvets.

‘These are going straight to the tip,’ she said. ‘Can you smell that? They’re damp. Damn, I hope it’s not in the walls.’

She peered at it. ‘Is it plastic? It looks like it came out of a vending machine. Throw it away, there’s enough junk in this house already.’

‘It’s sea-glass. I found it in the kitchen. Do you think it’s a good-luck charm from your gran? To wish us well?’

Alice threw the musty duvets into the hall. ‘Trust me, Rain. My gran didn’t wish anybody well.’

The folded page fell when we bashed the frame of the front door trying to carry the old bath out. I know, I know, we should have hired someone, but to be honest what little money we had was tied up in the house. Turns out, just because you inherit something, doesn’t mean you get it for free. Alice tucked the paper in her pocket and then, when I was driving to the tip, the bath awkwardly wedged between the boot and the backseat, she pulled the paper out and unfolded it. It was as yellow as old bones and smelled musty-sweet.

‘Hello! Are you listening?’

‘It says,’ she said. ‘No, it’s nothing.’ And she balled up the paper and put it in the glove compartment

‘Al, stop being weird! What does it say?’

‘KELPIES TO HELL,’ she said.

I wasn’t sure whether to laugh. ‘What’s a kelpie?’ Alice didn’t reply, so added: ‘Call me a Sassenach if you like, just tell me.’

‘A kelpie is a mythical creature,’ Alice said, frowning. ‘Lives in lochs. It’s a horse and also a beautiful woman. If it doesn’t like you, it drags you into the water and drowns you.’

So I drove the rest of the way to the tip in silence, and together we lifted the bath where Alice’s granny had had a stroke and drowned, and we threw it away.

Alice found this one. It was the size of a thumb, wedged into the skirting board under the bed. She brought it to the kitchen as I was making tea and said: ‘Rain, I can’t find my glasses. Can you read this?’

I rubbed the tiny horse’s haunches, feeling the symbols etched into the copper.

‘It’s not words,’ I said. ‘It’s runes or something. Maybe it’s an old Highlands superstition, and your gran left it to protect us from being trampled by – well, not a horse, but – life? Sadness? Money worries?’

Alice raised her eyebrows. ‘Well, my mum always did say my gran was a witch. She stole another woman’s man, did I ever tell you that?’ Alice took the horse from my hand. ‘My granddad was married to someone else when they met. A woman always dressed in green, who wore strange jewellery, rings made of glass she found washed up on the beach. She had green eyes and long black hair – black as a winter night, black like it was always wet.’

My eyes were wide. ‘What happened?’

‘My gran went round to talk to her, to say, basically, I want your man and there’s nothing you can do about it, and she must have been pretty convincing because the next day the woman was gone. She left the village – went for a job down south or something. But you know the strange thing? No one ever saw that woman again.’

Alice laughed. ‘Come on, Rain! What, you think my wee old granny was a murderer?’

‘Why not? Every murderer has a family.’

‘It’s just a silly story,’ Alice said. ‘Gran was the other woman and so she had to make the original woman into a baddie, a mythical villain, just to make herself feel better. That’s all. And she –’ at this Alice jerked her hand and dropped the horse. It thudded to the floor and skittered away.

All I could do was stare at the blistered outline of the copper horse burned into Alice’s palm.

It was boring, dirty work, doing up the house. Alice’s gran hadn’t touched anything in years – aside from hiding weird things in grubby corners, apparently. There was so much to do that Alice and I always ended up working late into the night, holding off the dark as best we could. Alice’s blistered hand was healing, but slowly, and I’d got a nasty scrape up my calf from a cluster of nails left inexplicably spiked through a cupboard door.

When I found the long string of pearls on top of the wardrobe, I stripped off all my clothes and stepped into the shower – then stepped back out and wrapped the pearls around my neck. They were as long as a bridle; I looped them three times and they still covered my breasts. I stood under the hot water until I couldn’t see for steam, then I walked, still dripping, into the kitchen where Alice was fixing the radiator.

What do you think I should do with – she said, and then she saw me and dropped the spanner. We made love on a clean dustsheet on the kitchen counter, and afterwards, Alice whispered in my ear: ‘That’s how you catch a kelpie, you know. With a string of pearls around its neck. My granddad told me – he caught a kelpie once. You catch it, and then it has to love you forever.’ She rolled on top of me and kissed me hard, so hard the pearls pressed red circles into my sweat-damp skin, so hard my teeth nicked bloody on the inside of my mouth.

We’d plumbed in the new bath, and I christened it that night with candles and bath oil. I never felt clean in this house; we’d scrubbed every inch but still kept catching this smell, rancid and salt-heavy like old seaweed. Although I hadn’t said anything to Alice, I was worried that the walls were damp at the centre, the house rotten to the core.

I filled the bath full of the hottest water I could stand and slid right down, my nose the only dry part. I felt my muscles relax into liquid and heard my heart boom, boom, boom – but was that my heart? Or was it hoofbeats? And then there was nothing holding me up, and I was underwater, water in my nose, water in my mouth, and I couldn’t breathe, and I couldn’t find the sides to pull myself out and I felt water in my throat, water in my lungs, and I sank down into the darkness.

Then Alice was pulling me out and I was crouching on the bathroom floor, coughing up water, breath rasping, and there was something wrong with my hand, something tight and tickling, and I reached for Alice, and my fist was wrapped all around with layers of hair. Long black hair, black as a winter night, and as long as a horse’s mane.

At first, I couldn’t tell what was inside. When I pulled it out of the hidden dark place inside the bathroom wall, I thought it was jam. Beneath its jacket of dust, it looked plum-dark and sticky. My tongue tingled; I thought about toast and tea and the sweet smear of berries, sitting in the sun with Alice, the sound of her laugh. But that was silly: it was too late for sun, and Alice hadn’t laughed for a long time.

I shook the jar and felt the thing inside smack off the glass, the wet press of meat. I gave the jar to Alice. She went to unscrew the lid, then thought better.

‘A what?’ I asked, because I’d heard but I wished I hadn’t. In Alice’s shaking grip, the purplish thing in the jar quivered.

‘It’s what the kelpie leaves,’ Alice said, and her voice didn’t sound right. ‘It drags you to the bottom of the loch and eats you, every single bit of you except your liver. If you find a liver on the shore, that’s how you know the kelpie has eaten someone.’

I wasn’t surprised when Alice and I found the spent silver bullet wrapped in blackened grot beneath the floorboards. It wasn’t easy: we had to pull up just about every rotting, stinking board in the house, and by then our hands were slick with blood and filth. Alice had told me that a silver bullet is the only way to kill a kelpie, so if Alice’s gran really had killed it, the bullet had to be there somewhere. Her mistake, her haunting, was in keeping the thing. As proof? A memento? We’d never know. Then again, we knew that her bathtub drowning was due to a stroke. So I guess you can never really know anything.

Alice and I gathered up the ring and the paper and the horse and the pearls and the hair and the glass jar and the bullet, and we put them all in a box. We drove for hours until we got to the sea, to the place where her gran had got her man, and we climbed to the highest cliff and we threw it all into the sea.

We drove back to the house in silence, neither wanting to think about what we might find when we got there.