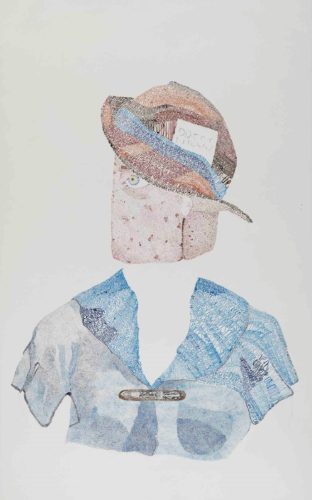 Award-winning NY artist susan c. dessel left a successful corporate career to study Studio Art (BFA Hunter CUNY, 2003. MFA Brooklyn CUNY, 2006). She has exhibited in the U.S., London, Prague, & Yerevan. The first visual artist awarded a Frankel Fellowship, University of Michigan (2013/14), Dessel researched the life and work of Martha Gruening (1889-1937) suffragist, civil rights activist,… and began creating a new body of work: Brick In A Soft Hat. Dessel’s art considers the responsibility we each have to effect social change through our actions or inaction, leaving it to viewers to interpret this for themselves.

[Magistrate Scott] chastised the ‘impudent’ Miss Gruening and told her that she had no business to watch the police and that It was only because of ‘trouble makers’ of her kind that the strike was still unsettled.

As the first visual artist invited to participate as a Fellow, Frankel Institute for Advanced Judaic Studies-University of Michigan, I proposed to research Martha Gruening, an important but little-known activist and journalist, and make her life visible and accessible by restoring her voice. Gruening lived her values and spoke her mind at a time when such values were not in sync with those of society-at-large. As a dangerous woman she was committed to impact issues and change attitudes that continue to fester in twenty-first century America. I identified information suggestive of visual iconography to create portraiture highlighting Gruening’s work and its ongoing relevance.

Martha Gruening (1889-1937) is an early, inspiring example of a woman who conceived of the intersection of gender, race, and class. She lived at the turn of the twentieth century during first-wave feminism associated with women’s suffrage, undeterred that others perceived her as dangerous to the status quo she did not shrink from public controversy.

Her life embodied her values and beliefs and confidently and passionately she risked contempt confronting widely-held societal views without flinching. Arrested at age twenty-one, rather than seek bail Gruening spent the night in Philadelphia’s notorious Moyamensing Prison. The arresting officer later described her as “a brick in a soft hat,” (NY Call, February 16, 1910:5), a hidden danger in plain sight.

The daughter of a renowned physician, Martha grew up in very comfortable circumstances. She spoke German at home and as a youngster lived abroad, learning French and widely exposed to art and culture. In NYC she attended Ethical Culture School which reflected her parents’ views of social justice, racial equality, and intellectual freedom. Atypically, Ethical did not have quotas and was committed to having a substantial part of its student body on scholarship, situating Gruening in an environment that blurred class distinctions. Public service, highly valued by the elder Gruenings, was expected of Ethical’s students, and conversation around the Gruening dinner table engaged young Martha in politics and international news.

Gruening spent her life as an activist and journalist working tirelessly for civil and political rights and progressive ideals, an unusual path for a young Jewish woman of means. At Smith College (1909) she founded a Suffrage Club and after graduation began advanced studies at Bryn Mawr in preparation to enter Johns Hopkins Medical School. But in January 1910, while observing a protest in support of young female shirtwaist factory employees on strike, her arrest and overnight imprisonment were life-changing experiences and lessons about police conduct, the legal system, class-based inequities, and the power of the press. Revising her plans Gruening began working as a free-lance journalist, and travelled across the country as an organizer for women’s voting rights before enrolling in New York University School of Law (JD 1914).

“… I have an idea… having [African American] Mrs. Mary Church Terrell for one of the speakers? … a good suffragist and a splendid speaker. … showing how inclusive [the] movement was – … She’s a graduate of Oberlin. It would be so nice and ‘national’ and it would make our dear Kentucky hostesses so mad… It’s a question we’ve got to have out with the Southern membership sooner or later …”

Her suggestion of Terrell as a speaker was rejected. Nevertheless in August 1911, Gruening sent the NAWSA Lexington, Kentucky Convention Resolutions Committee a Western Union Night Letter, resolving [that the women] “…express sympathy with the black men and women fighting for the same battle and recognize that it is as unjust and as undemocratic to disenfranchise human beings on the ground of color as on the ground of sex”. Her resolution was opposed, tabled in committee, and never brought to the convention floor.

One hundred and one years before the U.S. awoke to #BlackLivesMatter, Gruening asserted the connection of suffrage to Black civil rights in “Two Suffrage Movements.” Her early writing advocated for women’s voting rights but she soon saw suffrage as part of a larger struggle for civil rights for all Americans as guaranteed by the Constitution. “Two Suffrage Movements” was published in the National Association for Advancement of Colored People (NAACP) magazine (The Crisis V4 N5. September, 1912:245-247), the then-leading platform for the advancement of racial equality and the ideals of American democracy manifest through civil rights for all citizens. She  wrote of dangers inherent in the distance NAWSA had put between those fighting for voting rights for women and those with similar goals for African Americans, incorporating into her article the words of Black abolitionist and women’s rights activist Sojourner Truth’s unscripted speech “Ain’t I A Woman?” (1851 Women’s Convention, Ohio).

Gruening noted “no cause is great to the exclusion of every other… Here are not two issues at stake, but merely the vital principle of democracy.”, concluding “what all suffragists must understand, whatever their sex or color – all the disfranchised of the earth have a common cause.” Her words ring true today, over one hundred years later.

Gruening became an ardent civil rights activist, serving as NAACP Board Secretary 1912-1914 while studying law (JD 1914) and 1917-1918. In 1916, as the government’s Preparedness Campaign sowed seeds for public support of U.S. military intervention in WWI, Gruening was among liberal thinkers invited to respond to The Masses magazine survey “Do you believe in Patriotism?” Her poetic response, “Prepared” (The Masses. March 1916:13), minced no words:

As long as I can hang a Jew and burn a nigger,
Or ride the labor agitator on a rail;
As long as I can put any man I don’t like
In jail, and keep him there
On the flimsiest pretext or none,
And shut the mouth of the fool
Who cries for free speech and assembly—
When for chastity’s sake, I jail the prostitute
After I’m through with her; when, revering mother-hood,
I snatch the bread from the lips of the working mother;
When unwritten laws proclaim my belief
In the sacredness of lust, jealousy, possession, and revenge,
And the written law’s limit is given those who stir up discontent;
When I can throttle science and art and the right to belief and opinion,
My prejudices squatting like toads in the path of freedom;
When God is officially my pal and does my dirty work,
And I can kill a political rival with the terms “Atheist”
And “Free-lover”—even though my own life smells to heaven;
When I can put a ban on truth and make obscenity pay dividends;
When American life is kept cheap and American profits sacred,
Why shouldn’t I stand prepared to defend American freedom?
Why shouldn’t I shed my blood as well as the blood of my neighbor
To guard these inherited rights against any alien invader?

In 1917 Gruening co-founded the New York Bureau of Legal First Aid, renamed NY Bureau of Legal Advice, the first organization offering free legal service to protect individuals’ civil liberties, particularly conscientious observers, as the US stood poised to enter WWI. In June, 1917, accused of anti-conscription activities the Bureau was investigated, raided by the FBI (September 1918), and closed (Fall 1919). In April 1919 Gruening co-signed the “Statement of the NY Bureau of Legal Advice”, deploring the US War Department practice of imprisoning conscientious objectors in solitary confinement. Coincidentally and courageously she defended the rights of those already serving, “… requesting equal rights for colored and white men in the navy … Gruening, white, of NY, said the Stars and Stripes did not stand for liberty and justice when under it the colored people were denied reward for work in its behalf”. (The Washington Post. May 18, 1917:5).

She never flagged in her efforts on behalf of systemic change or to right injustices in our democracy. Before the U.S. entered WWII, as progressives supported free speech for the Nazis, Gruening wrote a Letter to The Editor lambasting Nazi propaganda (The Nation V137 N 372. December 20, 1933:708).

Issues of police brutality and racism in America today cannot be divorced from events in our history. As a white journalist Gruening was able to access places and people off-limits to Black correspondents, and as a feminist her inclusion of Black women’s stories accompanied by their photos in “The Massacre of East St. Louis” (The Crisis V14 N5. Sept.1917:219-28) presented a unique perspective on this riot which remains among the most vicious in American history.

Gruening, assisted by NAACP Field Investigator Helen Boardman, compiled, analyzed verifiable data, and organized the material into the NAACP’s first published book (1919), 30 YEARS OF LYNCHING IN THE UNITED STATES 1889-1918. They painstakingly gathered the data manually, documenting 3,224 lynchings: 702 whites (11 female), 2,522 “colored” (50 female). The information, presented in tables by state and year, was accompanied by 100 individual accountings described in horrific detail, including the stories of 11 women (four pregnant) that confounded generally held perceptions of lynching.

Gruening’s life-long professional and personal relationship with W.E.B DuBois, editor of the NAACP’s Crisis magazine, had been initiated in 1911 by her interest in discrepancies between the education of white and black children.

Drawn to European models of education based on the fundamental rights of each child, Gruening participated in and reported on progressive education in Europe. In 1917 as a single white Jewish woman she adopted David Butt (1912-1936), a young African-American boy. Gruening struggled to raise her son according to the values and principles that guided her life while facing hard realities of parenting, including challenges of societal prejudice, the contrariness of David’s inclinations to the educational models she lauded, and economic challenges of irregular and inconsistent income. Yet resolute, with an inheritance from her father Gruening purchased the Gomez Mill House (1919) intending to found a Libertarian School: an international school free of racial and religious prejudice and class differences with a curriculum that respected the rights and needs of each child. Regretfully the school did not succeed.

“Dear Burghardt  Your … letter went to my heart. …There is something else that I wish everyone who knows about it might know and that is how deeply knowing David has confirmed my feeling as to the utter illusionness of all race barriers…”
(February 7, 1937)

“…a unique book… beautiful and in many ways an honest one… if Doris Ulmann’s pictures deserve higher praise for beauty and veracity than the accompanying text, it is largely because the camera is a more objective instrument… than the human mind….”

“… if one cannot accept these premises and cannot see it as the manifest destiny of the Negro to be cheerfully and quaintly servile, poor, ignorant, pious, and superstitious for the edification of the Big House, one feels a speciousness about this writing…[it] lies in her interpretation of her material, … It is even more valuable perhaps, for its revelations of the interpreter and the class she represents than for any light it shed on those she interprets…”

Martha Gruening’s courage on behalf of others leaves us not just a legacy but a challenge: the responsibility to reimagine our society and act on our vision.